Jeff Cohn's 2017s look to be worthy followups to his outstanding lineup of 2016 Zins and Syrahs.

Sonoma-based winemaker Jeff Cohn is powered by kinetic energy. At least it can seem that way sometimes, and he hasn’t lost the drive and determination that have propelled his career since his first wine gig as an enologist at Rosenblum Cellars in the mid-‘90s. The fact that Cohn specializes in California Zinfandel and Rhône-style reds—wines that still require a “hand sell” in today’s market— only underscores his tireless ethic.

His portfolio in 2016 included seven Zinfandels and 10 California Rhône reds, not a slight undertaking. I reviewed 12 of those wines, and only the value blend Dealmaker California 2016 (88 points, $20) rated less than 90 points on Wine Spectator’s 100-point scale. I recently visited Cohn, 57, at his tasting room, just off shady Sonoma Plaza. With his wife and partner, Alexandra, Cohn transplanted operations from Alameda, in San Francisco’s East Bay, to Sonoma County two years ago, which followed a 2014 rebranding effort that saw the winery's name changed from JC Cellars to Jeff Cohn Cellars. In 2017, the winery moved just up the road to Santa Rosa, centrally located among many of Cohn’s vineyard sources. It was a big move for the Cohns, who had been working out of Alameda since 1996. 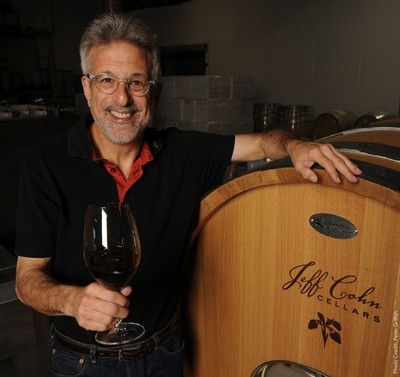 Cohn’s 2017s are as good as his 2016s and, in a few cases, even better, but I’ll reserve final judgment until I taste the wines blind at our Napa office later this year. The 2017 vintage in Northern California was hot and dry, and marred by the most devastating wildfires in Sonoma and Napa history. Grapes like Zin and Syrah and Grenache tolerate warm growing conditions better than most, but it’s safe to assume the wines will be plumper and riper than in a cooler year. Cohn’s 2017s are certainly rich and full-bodied, but they’re also structured and focused. Cohn has dialed back the French oak—for the better, to my taste—without losing his distinctive style. He is also using more whole-cluster fermentations to bring out the savory qualities of his reds. “I like for my Zins to have a Rhône quality,” he says.

Three of the wines I tasted with Cohn stood out, as much for their distinctive personalities as for their quality. Jeff Cohn Zinfandel Alexander Valley St. Peter’s Church 2017: One of the older vineyards in Sonoma County, St. Peter’s was originally planted in the 1880s. The 2017 is distinctive yet refined, with deep licorice and blackberry flavors. Jeff Cohn Zinfandel Sonoma Valley Iron Hill Vineyard 2017: Jammed with personality, with lavender, wild game and wild berry accents. Jeff Cohn Syrah Rockpile Domaine des Chirats Rockpile Vineyard 2017: A collaboration with Rhône specialist Yves Cuilleron, this wine combines depth and power with elegance.

Watch for my formal blind reviews of these and the rest of Cohn’s 2017s in the coming months.